Where do Oklahoma's numbers come from in its Supreme Court case?

On Wednesday, the state of Oklahoma will argue to the U.S. Supreme Court that they should be able to prosecute people who are not Native when they commit crimes on reservation land.

From the moment the high court ruled in 2020 in McGirt v. Oklahoma that Congress never disestablished the reservation of the Muscogee Nation, Oklahoma Governor Kevin Stitt has said the decision created chaos. The ruling meant the state had been illegally prosecuting crimes for decades when the tribes and the federal government should have had jurisdiction. So, the governor and his administration filed dozens of briefs with the court asking them to reverse the decision.

Stitt told an audience at a Tulsa Chamber of Commerce meeting in August 2021 that the ruling was creating uncertainty for the state's business environment.

"When we say overturn the McGirt ruling, what we're seeking is the complete restoration of Oklahoma sovereignty, the way we've all known it for the last 114 years," said Stitt. "McGirt is the biggest threat to Oklahoma."

The Court declined to hear all of the total reversal requests, but they did agree to consider a request to give Oklahoma concurrent jurisdiction in Oklahoma v. Castro-Huerta. The case centers on Victor Manuel Castro-Huerta, a non-Native man who was sentenced to 35 years in prison for neglecting his Native American stepchild while living on the Cherokee Nation reservation. His conviction was overturned by the Oklahoma Court of Criminal Appeals after he argued that the state lacked jurisdiction over his case. (He has already pleaded guilty to federal charges.) Oklahoma then appealed the case to the Supreme Court, reasoning that the state should retain jurisdiction over Castro-Huerta and all other non-Native defendants in crimes with Native victims.

To prove that McGirt wreaked havoc in Oklahoma, the state is claiming that it has lost jurisdiction over 18,000 prosecutions a year, many of which are now "going uninvestigated and unprosecuted, endangering public safety."

That sounds like a huge number, so we started trying to track down where it came from.

For months, we sent queries to the governor’s office, the Office of the Attorney General, District Attorneys, the Oklahoma Department of Corrections, tribes, and the federal judiciary. No one could provide any data to support that 18,000 number.

The Attorney General's staff said they couldn’t provide information due to active litigation.

According to data collected from the Tulsa County District Attorney and the Oklahoma District Attorneys Council, the total number of criminal cases filed in eastern Oklahoma fell by 13,131 from 2019 to 2021 — the years that the reservations of the six tribes were affirmed.

That's a significant number, but less than 18,000. (It should be noted: These are the same years that the coronavirus pandemic reduced the number of arrests and prosecutions in Oklahoma and affected rates across the country.)

The state also claims that tribal and federal efforts to take over cases were "woefully insufficient" and left an "alarming gap" of a suggested 10,000 cases.

To see if there was a gap in criminal prosecutions, we compared the decrease in state cases filed with the number of federal and tribal cases filed. Since their various reservations were affirmed, the tribes have filed about 11,400 felony and misdemeanor criminal cases, and the federal courts filed nearly 1,000 cases in 2021. Taken together, that leaves a gap of fewer than 1,000 cases, and some of that may be more the result of the pandemic than any problem specific to Oklahoma and the reservations.

Cherokee Nation Attorney General Sara Hill says the state has an obligation to be transparent when they present their information to the nation's highest court.

"When you make your representation to the Supreme Court, lawyers have an obligation to ensure that you're giving them the best and most accurate information that you can provide," said Hill. "I mean, we have a responsibility to be honest with the court."

It's not the first time Oklahoma has made a claim about the number of prosecutions without evidence. In May 2021, Stitt was interviewed on the local Fox television affiliate and claimed a larger number of cases would be going unprosecuted and uninvestigated following the McGirt decision.

"Since 2005, the 17 district attorneys from that part of the state have told us there's potentially 76,000 cases that are up in question, that can be or have to be retried," said Stitt.

That 76,000 number is no longer relevant now that McGirt does not apply retroactively.

What tribes are doing

Tulsa County District Attorney Steve Kunzweiler described the criminal jurisdiction in Eastern Oklahoma as "chaotic." Tribal nations in Oklahoma acknowledge that the shift was considerable, but have also worked to step up.

They have increased the capacity of their criminal justice systems. They have filed thousands of cases and hired more prosecutors, while also receiving federal funds to hire victim advocates and special prosecutors.

Since July 9, 2020, Muscogee Nation officials have made 1,622 arrests and filed 3,932 criminal cases. To date, Muscogee Nation has 63 cross-deputization agreements in place, which allows both state and tribal police to stop, arrest, and detain people no matter the Native status of the suspect or victim.

Some tribes, such as the Chickasaw Nation, have even hired special assistant U.S. attorneys — who can prosecute cases in both tribal and federal courts — to help with the increased federal caseload. The Cherokee Nation alone committed nearly $30 million of its 2021–22 budget to criminal justice on its reservation — a historic amount.

Robert Gifford is a criminal prosecutor who has worked on a number of cases affected by the McGirt decision. He says the "sky is falling" attitude coming from Oklahoma officials is false and claims that local prosecutors don't want to cooperate.

"If you look at other parts of the country where the local police departments, U.S. attorney's office, the FBI, the CIA, the state attorney general, the U.S. Attorney General are all going, 'Yeah, we've been doing this since day one. You guys now have to start doing it,'" said Gifford.

Oklahoma House Speaker Charles McCall's district includes parts of the Choctaw and Chickasaw Nation reservations, and he says the ruling has created lots of changes.

"But what it has not changed is our ability to work with the tribes," said McCall.  "As far as the Legislature is concerned, it has not been an impediment to communication and to our relationship."

McCall wouldn't comment on the pending litigation before the U.S. Supreme Court, but he did say that no matter how the court rules, it is in everyone's best interest to work together.

It is the constitutional role of Congress, not the Supreme Court, to change who has criminal jurisdiction on a reservation. Oklahoma started petitioning the Court to review the McGirt decision only after its attempts at congressional legislation to narrow the scope of the decision failed. Congress has acted, however. The most recent congressional spending bill allocated more than $62 million to help with the costs of increased tribal criminal jurisdiction. And the recent reauthorization of the Violence Against Women Act expanded tribal jurisdiction over non-Native perpetrators for certain violent crimes.

Hill said this ruling could have a huge impact on Indian country beyond Oklahoma.

A full version of The Atlantic story can be read here.

This story was reported and written in collaboration with Rebecca Nagle and The Atlantic. Rebecca Nagle is a journalist based in Tahlequah, Oklahoma. Her podcast, This Land, won the American Mosaic Journalism Prize in 2020. 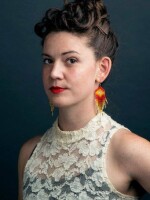 Rebecca Nagle
Rebecca Nagle is an award-winning advocate, writer, and citizen of the Cherokee Nation.
See stories by Rebecca Nagle
Donate Your Car to KOSU!
Get Started Here
Hey! Did you enjoy this story? We can’t do it without you. We are member-supported, so your donation is critical to KOSU's news reporting and music programming. Help support the reporters, DJs and staff of the station you love.