Even competitive hunting can't stop coyotes from thriving in Kansas

KISMET, Kansas — As morning light creeps across this pasture, Bryan Garrison all but disappears into the High Plains landscape.

Motionless and covered in camo, he reclines on a cushion next to a sagebrush.

With a shotgun in one hand and the remote to an electronic calling device in the other, he plays the role of DJ, spinning some of the coyote calling world’s greatest hits — from “cottontail distress” to “coyote yip duet.”

“I start most every set with a howl,” Garrison said. “I’m setting a scene.”

This is the opening day of the Southwest Kansas Coyote Calling Contest in Kismet. And Garrison, his son and a friend are competing with other teams to see who can call in and shoot the most coyotes from dawn till dusk.

Calling contests mark just the latest chapter in a centuries-long war between humans and coyotes as both species expand their range across the continent.

The coyotes are winning.

State estimates show the number of coyotes in Kansas has nearly tripled since the 1980s. But just because there are more of them around doesn’t mean that outwitting this wily canine comes easily.

Garrison’s heavy-duty coyote calling boombox sings out from the valley where he stashed it in a bush. Nearby, a motorized decoy waves a piece of fur back and forth.

After about 15 minutes, Garrison spots a flash of gray 40 yards ahead. He steadies his 12-gauge shotgun and fires twice. But the coyote is too quick. It disappears back into the brush.

“It’s fun because it’s hard,” Garrison said. “You don’t turn on a call and every coyote in the country come running to you.”

Their intelligence, resilience and extraordinary adaptability equip coyotes to thrive in the modern world, even as many other American mammals have declined or disappeared since European settlement.

Now, they are the most abundant large predator in the country.

So coyote callers figure that every animal they shoot means one less potential threat to livestock out on the range. Garrison, for example, said he regularly gets calls from neighbors asking him to come shoot unwelcome coyotes on their land.

“(Hunting contests help) ranchers and farmers take care of a serious problem,” he said. “If somebody was breaking into your house and stealing your goods and messing with your well-being, you’d do something about it.”

While hunting’s power to actually make a dent in the greater coyote population is questionable, this adaptable animal’s improbable conquest of America is hard to ignore.

Once limited to high deserts and prairies in the middle of the country, coyotes have colonized nearly all of North America over the past two centuries. It’s a feat made even more amazing by the fact that people have been trying to wipe them out just about that whole time.

Organized coyote hunts in Kansas go back more than 100 years, with communities from Liberal to McPherson to Topeka coming together to round up and kill them. Sometimes the townspeople made a day of it and ate dinner together after.

In the early 1900s, the state of Montana purposefully infected coyotes with mange to see if the mite disease would exterminate them. By the mid-20th century, federal hunters across the West were tossing poison-laced baits from airplanes and snowmobiles.

The USDA shoots down tens of thousands of coyotes each year from helicopters and kills thousands more with spring-loaded cyanide traps scented like meat.

Meanwhile, coyote hunting and calling contests remain legal in most states. In Kansas, the coyote season runs year-round with no limit. The state also recently legalized hunting coyotes after sundown with night vision scopes, which makes it easier to spot them during their active nocturnal hours.

Americans kill roughly a 500,000 coyotes each year. But through it all, coyote populations just keep getting stronger.

“People always talk about how if there’s a nuclear war or whatever, there’s going to be cockroaches and rats left. … I always throw coyotes into that,” Kansas State University wildlife specialist Drew Ricketts said. “They’ve survived as much persecution as any animal on the face of the earth, and they’ve just expanded in the face of it.”

Since the 1950s, coyotes have stretched their territory across North America by 40%, making themselves at home everywhere from the Alaskan tundra to the Florida coast to America’s largest urban centers. In his book, Coyote America, Dan Flores describes them as a “cosmopolitan” species whose adaptability mirrors that of humans.

They have crossed rail lines and bridges to make it to New York’s Central Park. In downtown Chicago, they’ve learned how to navigate crosswalk signals and cool off in a Quiznos soda fridge. And because there’s no hunting in cities, urban areas have become a sort of refuge for coyotes.

Their flexible diet helps too. Unlike other predators like bobcats and cougars — which eat strictly meat — coyotes will dine on just about anything, from deer, rodents and birds to insects, trash and fruit. Ricketts said they can be a real pest on watermelon farms.

“Most people think about them as predators, but really their diet breadth is about as broad as a raccoon’s,” Ricketts said. “They are very good at taking advantage of just about any resource that we make available.”

Humans have unknowingly given coyotes a helping hand in other ways, too.

Before Europeans settled in America, wolves killed enough coyotes to keep them in check, creating a kind of canine predator equilibrium. But after centuries of government-encouraged extermination, wolves have been nearly wiped out in the lower 48 states. That paved the way for coyotes to move up the food chain.

Then there’s the biological phenomenon called compensatory reproduction. The year after people kill a bunch of coyotes in a given area, the remaining coyotes’ litters will double in size. And young females will start breeding a year earlier than they otherwise would.

Some studies have even shown that indiscriminate hunting and trapping could disrupt coyotes' social order in a way that may increase the chance of a livestock attack. For example, the territory near a herd might be dominated by resident coyotes who have learned to hunt rodents there instead of livestock. But if those residents are killed, other transient coyotes who are more likely to eat calves could take over that territory.

“For every coyote that’s removed,” Ricketts said, “there’s another one waiting to take its place.”

On the final evening of the calling contest in Kismet, teams line up their coyote carcasses by the dozen on the grass behind city hall.

As coyote populations have grown in recent years, hunting competitions like this one have followed close behind. Just 85 miles up the road in Greensburg, the Pasture Poodles calling contest brought in 150 coyotes during the same weekend as the one in Kismet.

The contests have become more competitive, too.

To curb cheating, contestants need to follow a specific set of rules to get credit for each kill: submit a time-stamped photo of the coyote, zip tie a wooden block marked with the time of death between its teeth.

At the final check-in, volunteers use a small arsenal of kitchen thermometers to make sure the bodies are still warm. Then they check whether the coyotes have the right amount of rigor mortis based on the way their jaws clench those wooden blocks.

Most years, this is also when a scientist draws the dead coyotes’ blood to test for the bubonic plague. It’s a golden opportunity to get a quick scan of how rampant the disease is among the local rodents these coyotes have been eating.

Winning teams draw straws to see which member has to sit down with James Kelly, a retired cop and the contest’s last line of defense against cheating.

He has strapped thousands of coyote hunting contestants to his polygraph machine over the years. He’s seen teams try to pass off coyotes they didn’t hunt themselves. Teams that shot coyotes in nature preserves or with illegal guns or out of moving vehicles.

Kelly said the key to uncovering a cheat is his special recipe of detailed questions that approach the contest like a criminal case and don’t leave contestants any wiggle room.

“We're not doing polygraph for the heck of it,” he said. “We’re doing it for a specific goal to make sure that people aren't cheating.”

On this night, the winners pass the test. Altogether, the teams bring in a total of 83 coyotes. And that’s just a drop in the bucket.

Kelly said he’ll run polygraphs at eight other contests before the end of January.

A handful of states have banned coyote contests. And even where they’re legal, some have chosen to shut down amid pressure from conservation organizations and animal rights groups that describe them as inhumane and detrimental to the natural ecosystem.

But Ricketts, the K-State wildlife specialist, said that, while controlling coyote population numbers through hunting would be next to impossible, the coyote’s incredible resilience means that they’re able to bounce back from calling contests, too.

“The reasons that broad-scale population control of coyotes doesn’t work all that well,” he said, “those are also the reasons that make the calling competitions and continued intensive harvest of coyotes sustainable.”

Meanwhile, predators cause roughly 5% of calf deaths in Kansas, and coyotes are blamed for nearly all of them. For ranchers, it adds up.

“Even though that's not a huge percentage of calf losses,” Ricketts said, “that’s still about $4 million annually that Kansas producers are losing.”

Rancher Bob Davies can hear them howling at night around his pastures in the Cimarron River valley near Kismet. A few years back, they dragged off several of his calves around a watering hole.

“It was really bad,” Davies said. “That’s a big blow when you wait nine months for a baby, and the coyotes get your baby.”

The coyotes got so thick that year, he ended up renaming that piece of land “Coyote Pasture.” He hasn’t had as much coyote trouble this season, but he’s learned to keep a close eye on his calves.

And ultimately, he’s resigned to the fact that everyone who chooses to raise cattle in coyote country has to learn to live with these native predators.

Coyotes have called these plains home for millennia, and they don’t plan on leaving any time soon.

The Kansas News Service is a collaboration of KCUR, Kansas Public Radio, KMUW and High Plains Public Radio focused on health, the social determinants of health and their connection to public policy. 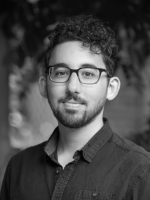 David Condos
David Condos is the western Kansas correspondent for the Kansas News Service and High Plains Public Radio, based in Hays, Kansas.
See stories by David Condos
The Latest From KOSU
Donate Your Car to KOSU!
Get Started Here
Hey! Did you enjoy this story? We can’t do it without you. We are member-supported, so your donation is critical to KOSU's news reporting and music programming. Help support the reporters, DJs and staff of the station you love.