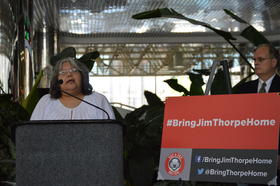 Members of the Sac and Fox tribe announced a campaign to bring the remains of athlete Jim Thorpe back to his home state of Oklahoma on Wednesday.

Thorpe was buried in 1953 in Pennsylvania after his widow reached a deal with a pair of boroughs to place his remains in a mausoleum there. The two Pennsylvania towns consolidated and renamed themselves Jim Thorpe, Pennsylvania.

Earlier this week, his surviving sons and the tribe petitioned the U.S. Supreme Court to bring him to Oklahoma under the Native American Graves and Repatriation Act, or NAGPRA.

George Thurman, the principal chief of the Sac and Fox Nation, said at a press conference on Wednesday that it was Thorpe’s wish to be buried on Sac and Fox land.

“I was raised traditionally as most of our people are, and whenever our people move off to another state, somewhere else, they always come home either while they’re living or their families bring them home after they expire,” Thurman said.

Thorpe’s traditional Sac and Fox burial in Oklahoma was allegedly stopped by his widow, who allegedly interrupted the ceremony and took Thorpe’s body. She reached a deal with the boroughs in eastern Pennsylvania, an area of the country in which the famous athlete never lived.

One of Thorpe’s sons first sued the town of Jim Thorpe, Pennsylvania for his father’s remains in 2010. Last year, efforts to bring Thorpe back to Sac and Fox land hit a legal snag when the United States Court of Appeals for the Third Circuit ruled his body is not held in a museum, a requirement for repatriation under NAGPRA.

Thurman said many tribes across the nation are watching this case closely.

“This outcome is going to affect their people, their burials, their repatriations,” Thurman said.

Steve Ward, the counsel for the Sac and Fox Nation, said Thorpe’s sons objected to their father’s burial in Pennsylvania but they did not have a legal tool until the passage of NAGPRA in 1990.

Ward takes issue with the 3rd Circuit ruling and said for many years, the U.S. Supreme Court has required lower courts to follow the plain meaning of statutes.

“In this case, the United State Court of Appeals for the 3rd Circuit invoked a judge-made doctrine that has not been recognized for many years by the Supreme Court to essentially apply the judge’s subjective interpretation of Congress’ intent,” Ward said. He added that the case raises separation of powers issues because the meaning of statutes should be gleaned from the language that is passed by Congress instead of a judge’s interpretation.

Sandra Massey, the historic preservation director for the Sac and Fox Nation, said NAGPRA was enacted because native people’s graves were looted.

“They treated us as relics and not people. And that’s still going on,” Massey said. “Twenty five years after NAGPRA, we’re still fighting for the right for a man to decide for himself how he wants to be buried. And he wanted to be buried in our way, our Sac and Fox way.”

Jim Thorpe won Olympic gold medals in 1912 in both the pentathlon and decathlon. He later played professional baseball and football.

Bringing Music And A Message Of Hope To Native American Youth

Native American youth living on reservations can often face an overwhelming array of challenges, including poverty, addiction and abuse. Partly because of hurdles, high school dropout rates and suicides are far higher on reservations than the national average.