KOSU is excited to announce the addition of Graham Lee Brewer to the Indigenous Affairs team, where he will be working with reporter Allison Herrera as an editor for the desk.

The Cherokee Nation citizen is also an associate editor for Indigenous Affairs at High Country News and a regular contributor to NPR and The New York Times. He previously worked for The Oklahoman, Oklahoma Watch and eCapitol.

"I'm thrilled to be working with Graham again," said Herrera, KOSU's Indigneous Affairs reporter. "Graham brings attention to detail and the skills to tell the nuanced and informed stories that are needed when covering Indigenous stories."

Less than one-half of one percent of journalists nationwide are Indigenous, according to The American Society of News Editors' 2019 Diversity Survey.

"Our news coverage should reflect all of the people who live here, and if we don't have people in our newsroom representing everyone, that isn't possible," said Rachel Hubbard, KOSU’s Executive Director.

As a board member of the Native American Journalists Association, Brewer has trained large news organizations on how to ethically tell Indigenous stories.

In 2020, Brewer teamed up with Simon Romero from The New York Times to report a story about Governor Kevin Stitt's falling out with the Tribes over the state's gaming compacts. The story shined a light on the unique situation Tribes in the state find themselves in as generators of revenue for the state as well as their citizens.

"With a landmark Supreme Court decision and disagreement around gaming compacts, the interrelationship between Indigenous Oklahomans and non-Indigenous peoples is at the forefront,” said Hubbard. "This is an opportunity to have someone who understands both of those worlds to provide necessary context."

In the coming year, Herrera and Brewer look forward to producing stories not just about Tribes in Oklahoma but for the citizens of those Tribes.

Support vital local reporting on Indigenous Affairs with a donation to KOSU. 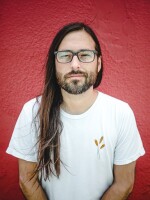 Graham Lee Brewer
Graham Lee Brewer was KOSU's Indigenous Affairs editor from December 2020 to April 2021.
See stories by Graham Lee Brewer
Donate Your Car to KOSU!
Get Started Here
Hey! Did you enjoy this story? We can’t do it without you. We are member-supported, so your donation is critical to KOSU's news reporting and music programming. Help support the reporters, DJs and staff of the station you love.