Kendrick Lamar has, at last, announced his next album (and last for TDE records), Mr. Morale & The Big Steppers, via the minimal website Oklama and the release of a powerful new track: "The Heart Part 5." Each release in the "Heart" song series has signaled both an imminent new project and a new artistic beginning for Lamar. Here, Lamar illustrates how he has grown as an artist and as a Black man.

Enveloped in a sample of the sultry "I Want You" by Marvin Gaye, "The Heart Part 5" addresses relationships – between Lamar and his fans, between the cultures, between a Black person and this country. Kendrick conveys this complexity in a minimalist video featuring only a single shot held on Lamar, his face intermittently deepfaked into O.J. Simpson, Will Smith, Kanye West, Jussie Smollet, Kobe Bryant and Nipsey Hussle. 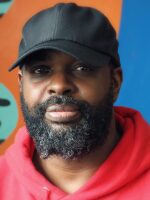 Tarik Moody
Tarik Moody is the director of digital strategy at 88Nine Radio Milwaukee and the host of Rhythm Lab Radio and 88Nine After 9. Listen here.
The Latest From KOSU
Donate Your Car to KOSU!
Get Started Here
Hey! Did you enjoy this story? We can’t do it without you. We are member-supported, so your donation is critical to KOSU's news reporting and music programming. Help support the reporters, DJs and staff of the station you love.