Skating Polly may have moved onto national fame and acclaim, but they will never forget their Oklahoma roots. The band said they are "literally so stoked for Norman Music Festival" and that the festival "will always remain one of (their) favorite places to play." The band chats with our music intern, Kyra Bruce, about their origins in Oklahoma, dealing with "Girl Band Geeks", and playing music with their family.

Do you feel that you are often put into a "female fronted" box? Do you think you have to work harder to be taken seriously in the punk scene?

Yeah, all girls in bands do to some extent. People have compared us to tons of female artists we sound nothing like and we’ve met lots of people who could care less about what our music sounds like they just wanna see girls in bands. And photos of girls in bands with other girls in bands. We call these people “GBG”s (Girl Band Geeks). The “punk” scene is actually pretty inclusive I think. It’s all about ugliness and being different right? I think it’s the “pop” side of the scene that we have to deal with as an Ugly Pop band that is more likely to turn their noses up at us or try to intimidate us because we’re young women. And that’s not always the case. Just a lot of people who come at music from a very technical, business perspective will try to make us feel small or belittle our accomplishments or treat us like we don’t know what we’re doing. They’ll wanna quiz us on our gear, or try to size us up about how we’ve gotten the opportunities we have. People don’t like that 2 young women can make good songs that connect with people without some secret arsenal of businessmen and their formulas.

Tell me about meeting some of your heros like Exene what was it like to have her produce one of your albums and become a mentor?

We met Exene at a solo set of hers in OKC back in 2009 and fangirled out on her super hardcore. We told her we were in a band and tried to play her some demos on an old Nokia flip phone. You couldn't really hear them in the venue so she gave us her email. We sent her the demos and a few months later she told us she’d like to produce our record!!! We’ve only gotten closer since. We’ve been on several tours with X, wrote 'Queen For A Day' with her, she’s given me and Peyton lots of amazing vintage clothes, we’ve played countless board games, and eaten countless tasty meals together. And right now- me and Exene are actually in the process of writing a couple more folk leaning songs to release as just the two of us! She’s honestly one of my biggest mentors. She’s dedicated her entire life to art. She’s always been able to make beautiful interesting things out of trash or discarded almost forgotten things. Just being in her backyard is inspiring. Above all she’s taught me to be resilient and not let other people’s wants or needs prevent me from making honest art.

Is there another one of your musical inspirations you never thought you would meet but ended up meeting?

Jeff Mangum was a pretty surreal one. He seems so untouchable. We’d seen him live all over the country and then Laura from Elf Power invited us out to a show in Santa Fe and let us come backstage and meet him. Peyton’s the biggest Neutral Milk Hotel fan ever so when he told us “oh yeah you guys rock” she had trouble not fainting. And then she wrote “Nothing More Than A Body” about him and what a surreal larger than life experience it was getting to meet someone she looked up to that much.

Since you are all siblings and half siblings, do you ever find it hard to play music with your family? Do you think it is an advantage or a disadvantage to have bandmates that are also family?

Haha being in a band with anyone would be challenging. We’re great at getting under each other’s skin though because we’ve had our whole lives to practice. But I would definitely consider it an advantage. We emotionally understand each other better than anyone, so writing is very open and comfortable. And we already speak our own language and have a lot of the same influences so it’s very natural to fall into a groove and be creatively in tune with one another.

You guys have called your music "ugly pop," what does that mean to you?

It means we love to write pop songs at core and we love getting sappy and gentle and pretty but we prefer them to be messy and noisy and ugly with them. Embracing imperfection and ugliness has been a big part of feeling powerful in my own skin so embracing that in our art is really the only way we can make art!

How do you guys remember coming up in Oklahoma and OKC? Do you have fond memories of the city or the scene? Any advice for young bands?

We used to go out to shows at The Conservatory in OKC every single week! We’d look at the bill that week, listen to all the bands and pick our favorite. It was a great sized room, every show felt so intimate, and me and Peyton would always “mosh” in the back. Which to us meant headbanging and jumping up and down. So many local bands were so kind to us and really helped us get our footing. The Boom Bang, The Feel Spectres, Depth & Current, El Paso Hot Button, S*****/Awesome, Broncho... we idolized them all. We tried to play with them as much as possible and were constantly finding new bands in the scene to fall in love with. When Broncho asked us to open for them on a tour we lost our minds! It was just a week of dates but we’d never done a tour of any kind. Me and Peyton never wanted it to end. I remember being so excited about selling ONE T-shirt because that meant someone in a city I don’t live in owns a T-shirt with MY band name on it! That was such a glorious achievement! Advice for young bands would just be to appreciate the people making cool art around you, support them, and be open to learning things from them And just to love playing & making music and do it as much as possible

Do you ever miss the feeling of being a rising band in Oklahoma? Do you ever struggle with the level of fame you've gained?

Oh I don’t know... I felt like the more national recognition we got as a band the less supportive and lovely the local scene was, unfortunately. That’s not to say I don’t miss Oklahoma and hundreds of people from Oklahoma whom I love dearly. I am literally so stoked for NMF, I've told all my friends and family a million times. It will always remain one of my favorite places to play! Just honestly I wasn’t treated very nicely at my school either, and I’d always fantasized living up in the PNW so I’m really glad we left when we did. And sometimes I guess. It always feels like there's more pressure on you the more success you have. I get so nervous about everything we do because I don’t want to let people down- which is such a counterproductive way to think. I stress so much over all the little things we need to do and making them better than the last thing and feel like I’m always in over my head. But it’s good to feel in over your head, that means you’re doing a lot and there’s a lot to do! 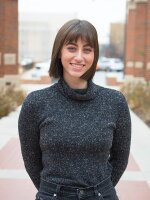 Kyra Bruce
Kyra Bruce was KOSU/ The Spy's music intern in the spring of 2019, as she finished her degree at Oklahoma State University in Multi-Media Journalism Production, with a minor in Philosophy.
See stories by Kyra Bruce
The Latest From KOSU
Donate Your Car to KOSU!
Get Started Here
Hey! Did you enjoy this story? We can’t do it without you. We are member-supported, so your donation is critical to KOSU's news reporting and music programming. Help support the reporters, DJs and staff of the station you love.