Jon Mooneyham, host of Everything All At Once Forever, shares his 10 favorite albums of 2017, in alphabetical order:

After issuing a slew of singles and EPs over the past five years, Glasgow’s party mutants finally unleash their first full-length album, with all their stylistic hallmarks (multilayered percussion grooves, whooshing and percolating synths and keyboards) intact, glued together with dubbed-out, digitally processed production techniques. Tracks like opener “Sauchiehall Withdrawal” (with singer Cassie Ojay’s soulful but frustrated refrain of “I’m always working so hard and for what?”) and “Spiritron” perfectly encapsulate the Golden Teacher dancefloor aesthetic, but their wheels hit new terrain with the title cut, with harmonizer-altered congas, bells, chimes and woodwinds evoking post-punk experimentalists like This Heat, Liquid Liquid and 23 Skidoo. RIYL: to shake your butt.

The lion’s share of LCD Soundsystem's best tracks are distinguished by mastermind James Murphy’s trenchant middle-aged perspective: by turns commiserative, admonishing, or forewarning. It’s an unusual lyrical mode for propulsive dance-rock, more suited to singer/songwriter confessionals and demanding close perusal of the text. And that gambit is all over American Dream, LCD’s "out-of-retirement" album (a suitably middle-aged thing to do), far beyond their previous three albums. Every song dissects mortality, change, loss, aging, and the inexorable decline, as LCD follow Irving Berlin’s advice to “face the music and dance.” With sly callbacks to older LCD songs (along with their usual musical and verbal points of reference), most of the tracks are built on Murphy & Co.’s solidly danceable grooves; the biggest exception is the album-closing morose fugue of “Black Screen,” Murphy’s farewell to hero, friend and mentor David Bowie.

What can I say that thousands (or millions) haven’t? The current king of the hip hop and rap world flexes his prowess with a complex concept album about faith, fame and despair, jettisoning the funk and jazz elements of To Pimp a Butterfly for retconned ‘90s-styled beats. Throwing himself on the psychoanalyst’s couch to doubt-check his success, his ego (and his id), the state of the union, and more, Lamar pushes his distinctively nasal but flexible voice into new spaces and cadences. Throughout, he ups his own formidable storytelling chops, climaxing with the (apparently true) tale of “Duckworth” and its “what if?” implications to Lamar’s own life, looping back around to the start of the album á la The Wall. Plus, DAMN. even makes me enjoy U2’s guest appearance, which I still can’t quite wrap my head around…

Notably the leader of pioneering no-wave trio DNA, Lindsay refocused his energies in the ‘90s both by producing albums by Brazilian artists (Caetano Veloso, Gal Costa, Marisa Monte, and others) and by creating his own eccentric strain of seductive Brazilian-influenced music. After a thirteen-year absence, Lindsay returns to his sexy geek persona with Cuidado Madame, re-enlisting dependable lieutenant (and stellar bassist) Melvin Gibbs for another clutch of (mostly) suave ballads. Most of the record was assembled over beds of candomblé drums recorded in Rio, and Arto throws in another wrinkle by incorporating his wildly untutored and atonal guitar-mangling, culminating in the skronkfest of “Arto vs. Arto,” a solo duet, if you will. Challenging and soothing in equal measure.

Two years ago, in a similar year-end wrap up, I listed The Eccentric Research Council’s wack concept album Johnny Rocket, Narcissist & Music Machine... I’m Your Biggest Fan. Ersatz band The Moonlandingz was created as part of the storyline, with members of The Fat White Family (great band name) drafted in for their “hit” song “Sweet Saturn Mine.” But the fake band turned real, Pinocchio-style, with crucial support from Sean Lennon: two years hence comes their deliberately retro "debut” album, laden with ‘70s glam rock swagger and facetious prog-rock pretense from the git-go. Sporting cameos from Yoko Ono, Phil Oakey of The Human League, and, uh, Randy the Cowboy from the Village People (!), it’s a fantastic (in a couple of senses) parallel-universe artifact. Though The Moonlandingz have announced they’re hanging up the band and concept for a while, I’m looking ahead to album number two.

Re-TROS - Before the Applause

Straight outta Beijing, China comes Re-TROS (short for Rebuilding The Rights Of Statues), an adventurous trio suturing together industrial, krautrock, house, techno, post-punk, and more — like Dr. Frankenstein on the ones and twos. But what could’ve been a grotesque mess is instead a well-shaped muscular beast, easing in with a brief ambient piece (perhaps a tip of the beret to Brian Eno, who guested on their first EP back in 2004) before the beat(ing)s begin with “Hailing Drums” and “Red Rum Aviv." In the middle is the Steve Reich-inspired “8+2+8 I,” and “Pigs in the River,” which might’ve been a Nick Cave leftover save for its political and historical context (elsewhere, former Chilean dictator Augusto Pinochet is repeatedly name-checked). The long gestation of this record (nine years after their first album) attests to the deft care with which every stylistic variation is deployed — here’s hoping their next LP doesn’t take quite so long.

Throwing a curveball here with a live version of “Red Rum Aviv” (or “Viva Murder,” if you insist) from four years ago (!), nerve endings all a-twitch:

Run the Jewels consolidate their position as the best hip hop tag team around with album number three. Doubling down on the anger, frustration and brothers-in-arms comraderie against the powers that be that fueled previous efforts, El-P and Killer Mike trade off with hurly-burly flow, leavening the fury with savagely comedic disses and rueful confessionals. The duo’s rhymes are top-game here, and El-P’s dystopic sci-fi soundscapes are some of his more effective in twenty-plus years as a beatmaker. Always blunt, usually blunted (if you get my drift), and a repeated hogger of turnable time.

Colin Stetson - All This I Do for Glory

I was slow on the uptake for Stetson’s work, though he’s released a clutch of recordings since 2003, and has collaborated with folks like Laurie Anderson, Arcade Fire, Tom Waits, and Bon Iver. My loss, as Stetson’s staggering third solo sax album takes a ball-peen hammer to my pleasure centers. Deploying a phalanx of extended techniques (circular breathing, singing through the horn, multiphonics, percussive fingering, loosened embouchure), Stetson sets up complex rhythmic and melodic ostinatos and sails mournful emotive moans though them — without the use of overdubs or looping devices. The result’s close in spirit and execution to Rahsaan Roland Kirk’s mind-boggling multi-horned workouts, which is pretty rarified company. 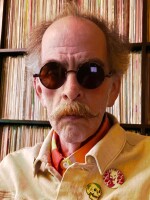 Jon Mooneyham
Jon Mooneyham has been involved in the OKC/Norman music scene since 1979 as a radio host, club DJ, video show host/producer, writer, performer, show booker, and record collector.
See stories by Jon Mooneyham
Donate Your Car to KOSU!
Get Started Here
Hey! Did you enjoy this story? We can’t do it without you. We are member-supported, so your donation is critical to KOSU's news reporting and music programming. Help support the reporters, DJs and staff of the station you love.