If you ask Chickasaw linguist Joshua Hinson what his favorite Chickasaw word is, he'll grin and open his dictionary. His finger will slide past the entry where his Chickasaw name, Lokosh, is listed and point to the word just below.

"So when you say amosholi, that means, like, I've eaten to excess," Lokosh says. "I've made a pig of myself, which is really awesome. Amosholi! I mean, it's hard to say I have a favorite word, but that's a good one."

Lokosh grew up in Texas, knowing only a few words in the language his ancestors had spoken for hundreds of years, Chikashshanompa'. Like most Indigenous citizens, federal boarding school policy disrupted his family's connection to their language. The schools were a federally funded effort to force Native Americans to assimilate into white society.

Lokosh’s great-grandmother, Charlie Perkins Cox, was the third generation who attended such a school. The institution beat Chikashshanompa' out of her. She was forced to use English, and that loomed over her when she became a mother. So, she shared little of the Chickasaw language with her children.

"It takes one generation for this thing to break," Lokosh says. "In some cases, even full-blooded families haven't had speakers in two or three generations."

Lokosh didn't experience a strong childhood connection to Chikashshanompa' until Christmas in 1989, when he was 11 years old and unwrapped a Chickasaw dictionary from his grandmother.

"The dictionary turned out to be the right move," Lokosh says. "I was just really taken by it. And you know, excited and ignorant in a way any kid would be about language."

Lokosh dabbled in trying to put sentences together from then on. His eagerness to reclaim his heritage language moved past a child's curiosity when he became a father. As he held his newborn son, Lokosh felt the gravity of being another broken link in his ancestral language's chain.

"You get the sense of obligation when you have children," Lokosh says. "I mean, there's a heaviness to it. It's my job, you know, to do right by these kids and teach them how to be in the world."

Wanting to share more than just a citizenship card with his son, Lokosh moved his family to Chickasaw territory, where he got serious about learning Chickasaw culture.

"I met Native speakers for the first time," Lokosh says. "I just had this instinct, like, they have everything that I want. If I hook on to this language and try to capture it for myself, then maybe I could figure out how to be a good Chickasaw person."

After over a decade with the Chickasaw Nation's Language Preservation department, Lokosh has become accustomed to the flood of requests his office receives during Native American Heritage Month. He's selective about his department's participation.

Lokosh and his team don't do "show and tell."

"Just speaking professionally from a language standpoint, you go 11 months out of the year, and we're just left alone to happily do whatever we want, doing the work that we ought to be doing for one another," Lokosh says. "And then come November, it's like, 'Oh, we really want some Indians to come perform for us.'"

Lokosh believes that if Native American Heritage Month is to have value, the annual observance must ignite American Indian citizens' hunger to know their culture. He also hopes November will highlight contemporary Indigenous identities within people’s local communities – a mission Lokosh’s own children are helping realize. His youngest son's dream is to join Lokosh’s effort and continue rebuilding the Chikashshanompa' speaking community.

"We have to maintain the language and those teachings and those obligations that I've been talking about," Lokosh says. "Because in 20, 30, 40, 50, 100 years, our people are going to need that, if we're still going to be Chickasaws."

This story was reported and produced by Arielle Farve Deer as part of NPR’s Next Generation Radio, hosted by Native American Journalists Association and KOSU. 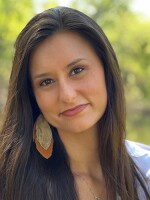 Arielle Farve Deer
Arielle Farve Deer was a member of the NAJA-NPR NextGenRadio: Indigenous cohort in 2022.
See stories by Arielle Farve Deer
The Latest From KOSU
Donate Your Car to KOSU!
Get Started Here
Hey! Did you enjoy this story? We can’t do it without you. We are member-supported, so your donation is critical to KOSU's news reporting and music programming. Help support the reporters, DJs and staff of the station you love.