Freedom Oklahoma held a candle light vigil for the victims of the Orlando, Florida shooting Sunday evening at their offices in Oklahoma City. The state’s LGBT advocacy organization welcomed about 500 people to the event.

Peggy Johnson opened the vigil with a song and was followed by local religious leaders, legislators and gay community advocates speaking about peace, healing and love. The June 12th shooting in Orlando comes during Pride Month, and Freedom Oklahoma director Troy Stevenson said that has not been lost on the people in attendance.

"We will not hide in the closet of shame. We will not forget who we are. And we will not pretend we are anyone else,” Stevenson said, while addressing the crowd. “This is our response to terrorism. We will stand together in solidarity, in unity and in pride because that’s who we are.”

Nicholas Nelson showed up to support the victims and said sometimes being gay and transexual can feel like a target despite the expansion of LGBT rights.

“Oklahoma all in all is a pretty supportive state even though we’re centered right in the middle of the Bible Belt. So, I think in more ways than one, it is creating fear especially during our sacred Pride Month,” Nelson said.

Sara Cunningham was at the rally and became a supporter of the gay community after accepting her son’s homosexuality.

“I’ve seen so much true meaning of what it means to be part of a community. And unfortunately we’re here to just band together under a horrible tragedy, a senseless tragedy,” said Cunningham. “This is a blessing. This is the beauty from the ashes if you will.”

Well-wishers greeted each other with hugs, and during the last speaker, someone began blowing huge bubbles in the crowd. Afterwards, attendees walked with candles along the same path that will be used as the OKC Pride parade route in about two weeks.

KGOU relies on voluntary contributions from readers and listeners to further its mission of public service to Oklahoma and beyond. To contribute to our efforts, make your donation online, or contact our Membership department. 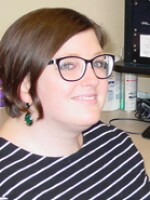 Paige Willett
Paige Willett is a University of Oklahoma grad who began working for KGOU as a journalism and broadcasting student.
See stories by Paige Willett
Donate Your Car to KOSU!
Get Started Here
Hey! Did you enjoy this story? We can’t do it without you. We are member-supported, so your donation is critical to KOSU's news reporting and music programming. Help support the reporters, DJs and staff of the station you love.