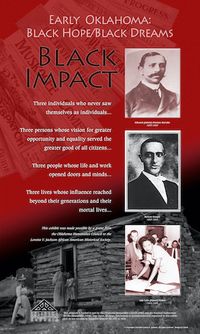 A traveling exhibit, offered through the Oklahoma Historical Society, features the accomplishments of three individuals who had a vision for greater opportunity and equality for themselves and others. Their accomplishments opened doors and opened minds; their influence reached beyond their generations and lifespan. Edward (Edwin) Preston McCabe arrived in Oklahoma Territory in 1889. McCabe sought a place where African Americans could establish their own towns similar to other groups of Americans. Roscoe Dunjee was only one generation removed from slavery and was a general on the battlefield for civil rights. Ada Lois Sipuel Fisher was the first African American admitted to the University of Oklahoma Law School on June 18, 1949, and the first to graduate in August 1951. Through her, African Americans succeeded in challenging the separate-but-equal doctrine as it applied to educational opportunities. Inspired by this exhibit, we are intentionally committing ourselves to grow what we know about the story of Stillwater. The Stillwater History Museum’s collection is rich in content from a patriarchal point of view. An ongoing strategic goal is to provide a more diverse and inclusive chronicle of our community’s history. By learning and celebrating the diversity that makes our community unique, we will strive to uncover the complete narrative that is Stillwater. To express your interest in joining this community conversation email director@sheerarmuseum.org or call (405) 377-0359.